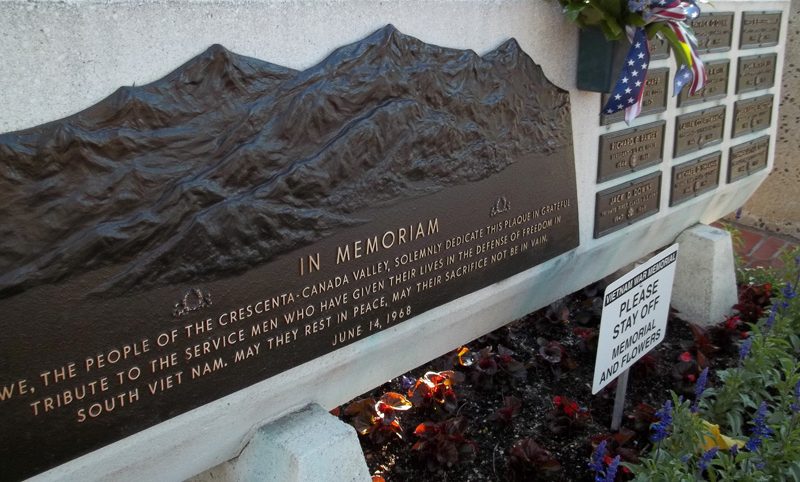 Let every nation know, whether it wishes us well or ill, that we shall pay any price, bear any burden, meet any hardship, support any friend, oppose any foe to assure the survival and the success of liberty.
John F. Kennedy

Memorial Day was officially proclaimed on 5 May 1868 by General John Logan, national commander of the Grand Army of the Republic, and was first observed on 30 May 1868, when flowers were placed on the graves of Union and Confederate soldiers at Arlington National Cemetery. What history tells us though, is a much more poignant story of love and loss covered in flowers. Those who began leaving the flowers on the graves were the women and children that were left behind. What they lovingly did to remember their loved ones also reminded those around them of the sacrifice these men made for our freedom. The tradition of leaving flowers continued year after year in towns all over the country. Lieutenant Colonel John McCrae, a soldier, physician and poet wrote a poem after his close friend died next to him in a horrific battle in Canada called “In Flanders Fields.” Here is an excerpt: “ In Flanders fields the poppies blow, Between the crosses, row on row, That mark our place; and in the sky the larks, still bravely singing, fly Scarce heard amid the guns below….” In 1915 a women named Moina Michael replied with her own poem: “We cherish too, the Poppy red, That grows on fields where valor led, It seems to signal to the skies, That blood of heroes never dies.”She then conceived of an idea to wear red poppies on Memorial day in honor of those who died serving the nation during war. She was the first to wear one, and sold poppies to her friends and co-workers with the money going to benefit service men in need. On a trip to the United States, Madam Guerin from France learned of this new custom. When she returned home, she began selling artificial poppies as well. This tradition spread to other countries. By 1922 the VFW championed this idea and started the “Buddy” poppy program that sold artificial poppies all over the nation made by disabled veterans to benefit the widows and orphans left behind by the war. I would personally like to invite you to join us for our annual Memorial Day Service that takes place at 8am yearly on Memorial Day and to bring flowers in memory of those who gave their lives. Your small act of kindness may seem so simple to you but will bring great joy to those that remain. Vietnam War Memorial: northwest corner of Ocean View and Honolulu Ave.[/vc_column_text][/vc_column][/vc_row]

IT Consultant and Owner of Nettechy

I joined the Montrose Chamber of Commerce last December and offered to help with the Website updates and immediately got to work.  I love to volunteer my time to any organization that needs it, and I’m looking forward to helping the chamber of commerce and the local businesses in our neighborhood to thrive.

Ryan Gahvaray
New York Life Agent
“The main reason why I decided to join MVCC was because I wanted to become more involved in my community. During my time here I will strive to deliver a positive impact on as many people in the community as possible.”
Sanjay Sharma
Loan Officer for New American Funding
“The majority of the small business owners are not fully aware of the advantages of joining the Chamber of Commerce, I am very excited to join the young, ambitious team of Montrose Chamber to help the local small business owner and the community. “
Sanjay Sharma

” Montrose is the quaint town in the foothills above LA that no one knows about. When people visit, they discover its timeless feel and usually never leave, making it their forever home. I am excited to work for MVCC sharing the community and lifestyle Montrose has to offer.”

Kimberly Fraisse
Daniel Fraisse Insurance Agency “I am delighted to be a part of the MVCC. I look forward to helping the community grow and continue to thrive. Growing up here and seeing how supportive everyone is of one another is very special. “
Molly Burke
” To me, community has always been very important and I am grateful for the opportunity to work with and support local businesses in a bigger way. Montrose is a special place and the MVCC is too.”
Raffi Ashdjian

Trevor Marca
1st Vice President
“I’ve always been passionate about helping small businesses thrive, but as we come out of COVID-19, I believe coming together as a community to help our locally-owned businesses is more important than ever. I look forward to synergistically connecting businesses to each other, forming strategic community partnerships that are mutually beneficial, and referring business to locally-owned companies whenever possible. Through these efforts, we can ensure that our local businesses thrive in this new socio-economic landscape.”
Sara Shahmoradian

“I’m excited to be joining the Montrose-Verdugo Chamber as a way of giving back to the community that has done so much for me. I look forward to connecting with members of the community and ensuring that Montrose continues to thrive!”
Hilda Morovati

“I’m looking forward to being a part of a local organization that promotes businesses in our own neighborhood by supporting each other grow and prosper. I’ve been a member of MVCC for more than 13 years and always appreciated the individuals on the board who made the mixers such a fun and rewarding event. Now it’s my turn to give back to my community and help the newer businesses experience the same warmth and welcome as I did.”
Mavil Aghadjanian
Executive Director
Contributing to the MVCC is a dream come true. It has all come back full circle, where I can now apply my passion for business and government to my hometown that gave me so much growing up. A thriving community listens to their members and I intend on being the voice for my generation that are just starting their families in our beloved Montrose.
Melina Shahbazian

Ashley Park
9th grade
Crescenta Valley High School
I love volunteering at the Montrose Verdugo Chamber of Commerce because I can help support and enrich my community.
Lucy Rickey
Crescenta Valley
9th grade
I volunteer at MVCC because I want to give back to my community. I hope to work in government one day and this internship is great way to get started.
Patrick Egan
Coordinated Wealth Management
Member at Large
3430 Ocean View Blvd, Suite E
Glendale 91208
818-248-2999
Kayla Regalado
Glendale Community College
Communications AA-T
Working at MVCC has taught me so much about the importance and value of staying connected to your community.
So much hard work and passion goes into a vibrant community like Montrose, and I am so lucky to be able to showcase it through my work at MVCC!
Rachel Willis
Chamber Photographer
Image Invisible Photography
323-628-5238
www.imageinvisible.com

Nicole Shahar
Local Business Owner & Blogger
Spotlighting the culinary scene in the foothills in partnership with the Montrose~Verdugo City Chamber of Commerce.
Nicole will be showcasing the business of the MVCC through social media with her unique blog perspective.
www.anoldsouljewelry.com
info@anoldsouljewelry.com
Michele Yi
Intern
I love working at MVCC because I can reciprocate the hard work that everyone puts into making Montrose a thriving community! Being surrounded by dedicated and supportive people shows me how privileged I am to serve in a workplace that promotes local empowerment.
Vincent Luculano