For decades, there have been stories told about the origins of Montrose that have turned out to be false. When Robert Newcombe was researching his photo history book on Montrose, he discovered that he had been duped by these stories along with everyone else.

Some of the Myths Included: 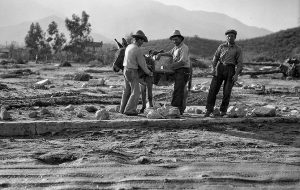 In late 1910, real estate agent Robert A. Walton teamed up with capitalist J. Frank Walters to buy almost 300 acres of undeveloped scrub brush in the southeastern corner of La Crescenta. They built a water system and graded the land in an unusual pattern with curved streets. In December 1912 they held a contest to name their new townsite and selected Montrose, though they never publicly explained the name choice. On February 22, 1913, Walton and Walters hosted a large barbecue and started selling lots in Montrose.

The first commercial building was a one story retail space at the southwestern corner of Honolulu Avenue and Verdugo Road that opened in early 1914. (Today that building is home to the Benitoite Restaurant.) Walton and Walters also bought the Eagle Rock Trolley, renamed it the Glendale and Montrose Railway, and extended the line through Montrose to La Crescenta.

Most of the people who moved to the Crescenta Valley in the early days came here for the clean, dry air, which made asthma sufferers breathe easier. Health sanitariums dotted the valley.

Early growth in Montrose was slow going, but in the 1920s, Montrose expanded rapidly, with the opening of a pharmacy, a hotel, a theater, a bank, and many retail stores. Many of the buildings in present day Montrose were constructed during the roaring 20s.

The area just south of Montrose was mostly orchards and vineyards owned by William Sparr. When he saw what was happening north of Honolulu Avenue in the 1920s, he decided to rip out his fruit trees and grapevines and divide his land into residential lots. He named the new area “Sparr Heights.” 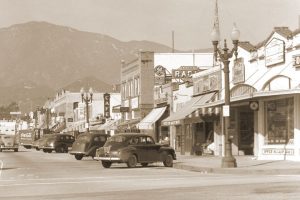 Montrose had a special charm to the city since its early days!

The Great Depression put the brakes on this growth and contributed to the demise of the Glendale and Montrose Railway, which closed in 1930. Montrose remained a quiet town for the next decade and a half, though a few large buildings were built on the south side of Honolulu Avenue, replacing the decaying lumber barns that had supplied house-framing materials during the 1920s.

In the late 1940s, many men who had been stationed in southern California during World War II decided to stay, and the Crescenta Valley boomed once again. The local mountains, however, could not supply enough water for the increasing population, and water rationing became a regular occurrence. Glendale, which had access to water from other sources, offered non-rationed water as an enticement to annex all of La Crescenta. When that measure was soundly defeated at the polls, Glendale offered annexation on a neighborhood by neighborhood basis, and parts of Montrose (including most, but not all, of the shopping park) were annexed by Glendale between 1951 and 1955. 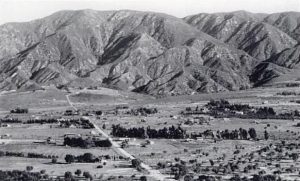 The view of La Crescenta Valley before its development.

Glendale’s enthusiasm was short-lived, however, as the popularity of suburban shopping malls devastated traditional business districts, including Montrose. Local politicians considered turning Honolulu Avenue into a truck route to alleviate traffic on Foothill. The local merchants, led in part by Frank “Mr. Montrose” Roberts, were determined to save Montrose, and, inspired by what was done in Grand Junction, Colorado, turned the business district into a “shopping park” in 1967 by adding curbouts, benches, decorative walls, and extensive landscaping. To make up for the loss of parking spaces, the city of Glendale bought properties behind the main buildings on Honolulu and created large parking lots.

Since then the Montrose Shopping Park Association and the Montrose Chamber of Commerce have sponsored regular events that draw thousands of visitors from all over southern California, such as the Arts and Crafts Fair, the Montrose Christmas Parade, and OktoberFest, and the weekly Farmers Market.

While Montrose has come a long way from its scrub brush start 100 years ago, its early buildings remind visitors of Main Street USA while the 1960s makeover comforts them with its park-like setting.

” Montrose is the quaint town in the foothills above LA that no one knows about. When people visit, they discover its timeless feel and usually never leave, making it their forever home. I am excited to work for MVCC sharing the community and lifestyle Montrose has to offer.”

Kimberly Fraisse
Daniel Fraisse Insurance Agency “I am delighted to be a part of the MVCC. I look forward to helping the community grow and continue to thrive. Growing up here and seeing how supportive everyone is of one another is very special. “
Molly Burke
” To me, community has always been very important and I am grateful for the opportunity to work with and support local businesses in a bigger way. Montrose is a special place and the MVCC is too.”
Hilda Morovati

“I’m looking forward to being a part of a local organization that promotes businesses in our own neighborhood by supporting each other grow and prosper. I’ve been a member of MVCC for more than 13 years and always appreciated the individuals on the board who made the mixers such a fun and rewarding event. Now it’s my turn to give back to my community and help the newer businesses experience the same warmth and welcome as I did.”
Sara Shahmoradian

“I’m excited to be joining the Montrose-Verdugo Chamber as a way of giving back to the community that has done so much for me. I look forward to connecting with members of the community and ensuring that Montrose continues to thrive!”
Trevor Marca
1st Vice President
“I’ve always been passionate about helping small businesses thrive, but as we come out of COVID-19, I believe coming together as a community to help our locally-owned businesses is more important than ever. I look forward to synergistically connecting businesses to each other, forming strategic community partnerships that are mutually beneficial, and referring business to locally-owned companies whenever possible. Through these efforts, we can ensure that our local businesses thrive in this new socio-economic landscape.”